Skip to content
August 24, 2012January 4, 2018 Posted in Parenting
(that I wish I’d known last time)
Recently a few people have said to me: “at least you’ll know what to expect this time”
I’m afraid my response tends not to be: “oh yes it’ll be much easier this time”. More: ” ahhhhhhhhhhhhh” *terrified, wide-eyed look* “Yes. This time I know EXACTLY what’s coming” (vocalising this may possibly have worried a few members of the pilates class. Oops).
But it is true that I have the benefit of hindsight this time and that despite desperately over researching everything before E was born, there were a few things I only learnt through experience. So in an effort to stay positive (and in case I forget them all in the sleep deprivation haze that will no doubt follow Smidge2’s arrival) I’m going to put into writing the stuff the books didn’t tell me. Listen up SouthwarkBelle:
Baby feeding:
Breastfeeding is really really bloomin hard.
At the start Its excruciatingly painful and not just where you’d expect. It encourages your womb to contract, which really hurts, plus it takes hours and hours and hours so pretty soon you’ll have a sore bum too. At some point It will seem like you don’t have enough milk, then you will get a cold and not be able to take any drugs for it, which sucks. You will wonder how the human race ever survived when this was the only option and if lactation is now the sole reason for your continued existence. BUT hang on in there for those first months, once you get the hang of it it’s cheap, easy and totaly worth it and  yeah, its really rather lovely.
Mummy feeding:
4 or 5 frozen meals in the freezer is not enough. Fill the freezer with as many pre prepared meals as you can before the baby is born. It’s not just that you won’t have time to cook once it is, no one else will either. Babies eat milk and time – without sufficient preparation you’ll just have to subsist on crisps and kitkats. Also- make sure that whatever you cook can be eaten one handed, preferably with a spoon, as you’ll probably have all of your meals for the first few weeks while also breast feeding. ( and it is probably considered bad form to drop an entire steak on a suckling infants head)
Sleep:
You won’t get much, sometimes none at all, but you’ll cope. I have no idea how, but you will. Don’t drive yourself mad counting how much you’ve had and certainly don’t start comparing sleep deprivation with your partner. It’s not a competition. You’re basically both losers in this anyway.
Personal hygiene:
Yes, having a shower is an achievement. If you then manage to find some non sick/milk/dinner encrusted PJs to put on afterwards then that’s the mummy gold medal. Actual clothes may be aiming too high though, don’t set unrealistic sartorial targets.
Entertainment:
Ask friends to lend you DVDs, This will reveal that:
A some of your friends have surprising taste in films,
B breast feeding your way though every series of “The Wire” won’t actually lead to your child having a Baltimore accent (phew)
Help:
Ask for it. This is going to be really really difficult. You may normally look after yourself,  but this isn’t something anyone should attempt alone and you know what? There are lots of really lovely, kind people out there who’d actually like to help. Let them. Right now it doesn’t mean you are needy or a burden. It means you are a mummy.
Everything is temporary
Eventually the baby will sleep, s/he will feed properly and do something other than scream and vomit. There will be first words, first steps, birthday partys and trips to the zoo and those first few weeks and months will be just a tiny segment of your life that you vaguely remember having to get through, before the real fun started! 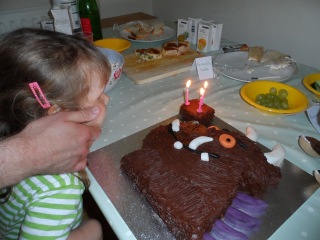