Tech For Mums, The 13 Best Smart Watch Apps For Mums/Moms

So, now for something completely different.

Smart watches are part of the new wave of wearable tech, essentially it’s like having a smaller version of a smart phone screen sitting on your wrist and connected to your phone by bluetooth. I wrote a while ago that I thought they would be ideally suited to women and especially Mums. Well, geek that I am I saved up my pennies and got one, I’ve been using it for a few months now and people have started to ask about it so time for a review (look away now if you have an iphone, you’ll need to wait a bit longer for a compatible watch.)

Here’s the context. I’m a working mum with a very chatty 5 year old and a very active 2 year old. Armies have gone to war with less stuff then I leave the house with to go to the park. I rarely have pockets big enough to comfortably carry my smartphone so if I’m out it is probably buried in the bottom of my enormous bag. If I’m at home I’m probably doing about 3 things at once and dealing with a constant barrage of requests or squabbles, organisation breaks down, stuff gets forgotten. A new watch can’t fix that but with the aid of these apps it can help: 1- Find My Phone
Free, with paid for add on options
Hands down this is the app I use most on my watch. A couple of taps and you can make your phone ring so you can find it. It’s not world changing technology but it is really very useful. It’ll also make the watch vibrate if you are going out of range of the phone connection. Handy for stopping you forgetting your phone when you go out.

2- Google maps
Free
I walk a lot, I have a hopeless sense of direction. Google maps on my phone has really helped with this but waving an expensive smart phone about while making it very obvious you are lost feels like an open invitation to thieves. It also isn’t very easy if you’re also pushing a buggy or controlling a rampaging toddler. With the watch integration I set up my route on the phone then chuck it in my bag. Every time I need to take a turning the watch vibrates and shows an arrow of which way to go, looking at it is just as quick (and discreet) as checking the time. 3-Glympse
Free
This app lets you share your location with someone for a fixed period of time, they don’t even need to have the app themselves. It works on the phone too but the watch app makes it super quick and easy to send a preset “Glympse”. My husband and I use this all the time now, it’s great if we’re both racing to get to nursery pick up or wondering if it’s worth holding dinner back for the other to get home. I also find it reassuring to know that someone can check where I am if I’m coming home alone at night, something which would be good for parents of older children too and it’s less intrusive than tracking their every move.

4- Text and Email notifications
Built in
Not really a specific App but oh so handy. Waiting for an urgent message and annoyed by digging out your phone after five separate unimportant notifications? New emails and texts simply pop up on the watch screen with a little vibration to let you know. If it’s important you can read it there if it’s not simply swipe it away, it’ll still be on the phone for later

5- Call notification and reject
Built in
Similarly any incoming phone calls will come up on the watch face with just a subtle vibration. Great if you are somewhere where it’s inappropriate to have a phone buzzing but you still want to be able to receive that urgent call from school or nursery. Anything unimportant can be rejected on the watch and if you do want to answer, accepting the call via the watch buys you a few extra seconds to dash out of the room and and/or hunt in your bag for the phone.

6- Voice Texting
Built in
The android wear watches use Google speech recognition technology so you can send a text to someone in your contacts without touching anything (or indeed an email or tweet) this has come in handy of any number of occasions, many of them involving pushchairs or hideous nappies. The voice recognition isn’t 100% but it’s pretty good and no worse than predictive text! 6- Google Keep
Free
Keep is a very basic note taking app. More highly specked options such as Evernote also integrate with the watch but I prefer the simple sticky note style of Keep. As with the voice texting this uses voice recognition so you can make quick notes even if your hands are full (or filthy).

7- Timer
Built In
“ok Google, set a timer, 5 minutes” you say that to the watch, you get a timer. Simple as that. Good for cooking, (timing experiments if you’re me) and possibly the naughty step! 8-Google Fit
Free
There are lots of fitness tracking and step counting apps available for smart watches. I particularly like the simplicity of Google fit which allows you to set achievable daily targets such as one hour of activity eg. walking or running, a day. It provides a little bit of motivation to get out and actually walk the school run when I’m feeling like being lazy and jumping in the car. 9-RunKeeper
If you are after some more serious exercise then there are a host of apps to for that too. I have the Sony SW3 which is the only one of the current devices to have it’s own built in GPS. With the runkeeper app running on my watch I can track my run distance, time, speed etc without having to take the bulky phone along. I can also still listen to music using bluetooth headphones as the phone has 4G of memory. On other smart watches it would be necessary to carry the phone along still but it could all be controlled from the watch and while I’m running I also find it much easier to flick through music or check run times etc on my wrist rather than having to wrestle my phone out of it’s pouch. Runkeeper is a little buggy on the watch at the moment but they are actively working on that in the mean time it may be worth giving a few others a go. Some of the other watches also have a built in heart rate monitor that some people might like to use when running.Free with paid for pro version 10-Sleep as Android
Free trail with paid for add ons
Sleep oh sleep, how I love you, how I miss you. This app has been around for a while on phones but required you to have your phone in bed with you which I was never very keen on and as it relies on measuring movement it was easily thwarted by a memory foam mattress or a fidgety partner. None of these things are an issue if you use the watch as the movement sensor. The app will monitor your sleep cycles, to see how much deep sleep you actually get and the smart alarm system will try to wake you up when you are in a light sleep to avoid that awful alarm clock shock – unless the kids get there first of course! I’ve only had this a few days so can’t comment on how accurate it is yet.

12- Wear Camera
Free
This neat little app is a remote control for your phone camera. Open it and the phone camera will turn on, tap it to take a picture.

13- Google
You can put a web browser on the watch although the screen size limits it’s usability, but voice activated Google searches are one of my kids’ favorite things right now. My five year old asks my watch questions when we are doing homework, my two year old just like to shout “Polar Bear!” at it as this brings up a picture. 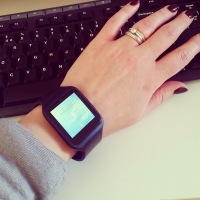 So This is my favorite toy of the moment, it’s not going to revolutionise anyone’s life but it really does come in handy at those times when actual hands are trying to juggle the world.

The downside for me (apart from the price of course!) is that at the moment none of the watches on offer are particularly attractive. Most go for either a sporty look or try to imitate a classic gents watch both of which are just a bit meh as far as I’m concerned. But there is the option to swap the straps on my Sony watch so hopefully a few prettier ones may emerge and the upcoming iphone has unsurprisingly made more of an effort in the fashion stakes. That said a couple of people have commented on liking the look of mine even without knowing it was a smart watch and of course being able to change your screen whenever you like is nice, my kids particularly like the animated Minion screen. My hope is that I’m not the only geeky mum out there who’ll be helped out by this new technology and that if it becomes clear there is a strong female market the manufacturers will put in more effort to making the things appealing.

Finally a couple of FAQ’s

What’s the battery life like?
This varies between models but if I turn my Sony SW3 off overnight it will easily last 2 days without a charge. Certain things like using the inbuilt GPS will drain it faster. It also charges really quickly. I’ve not actually timed this but certainly less than 2 hours for a full charge which is good if you’re using a sleep tracking app.

Is it Waterproof?
Again this varies but the SW3 is waterproof enough to go swimming in, and I’ve tested this out at a toddler swimming class!

Note – I got no freebies for this review, I paid for the watch and any apps myself, I’m just doing this in the hope it’ll catch on and more great apps and pretty straps will be made!

Parenting
← Post Natal Care; My After The Birth Story
→ Have Your Kids Had Their Smallpox Vaccination?

2 responses to “Tech For Mums, The 13 Best Smart Watch Apps For Mums/Moms”