I’ve been reading about the Kirkup inquiry into the deaths of mothers and babies at Furness hospital with great sorrow today. I wish I could also say I was shocked but I’m really not. I’ve not read the full 209 page document but one part of the executive summary really struck me.

“…working relationships were extremely poor, particularly between different staff groups, such as obstetricians, paediatricians and midwives; there was a growing move amongst midwives to pursue normal childbirth ‘at any cost’; “

There are many many wonderful midwives out there. Midwives who work tirelessly to care for women, to make their births safe and joyful experiences and who fight to improve services despite being overworked and under staffed. I’ve been lucky enough to be cared for by some of them. But in all the years I have been researching health issues around childbirth I’ve regularly seen two particular ideas being spread that worry me.

The first is that  “normal birth” ie. vaginal birth with no interventions or pain pain relief, is best. Targets should therefore be set to achieve more of them, individuals and entire services should be judged by the proportion of their births that meet these stringent criteria. Midwives (and others) who encourage women to have “normal births” are lauded. I’ve never been comfortable with this. Of course interventions are rarely welcomed and an unmedicated vaginal birth will be the best possible option for many women. But there are now many kinds of birth, both by choice and necessity. Sometimes the best possible birth is planned caesarean section, sometimes it needs an induction to get it going, sometimes a women may just decide that she is in dreadful pain, and as there is a really good, safe way to make it stop, she might as well use it. When so much effort is focused on promoting and achieving only one kind of birth there is surely a risk that all the others will be neglected. When people, especially midwives, publicly heap so much praise on this one kind of birth and endow it with benefits far beyond those that are scientifically proven, is it any wonder that many mothers who don’t meet these expectations feel like they have failed and perhaps let down their babies? The best birth is one where mother and baby feel safe and well cared for, where both emerge healthy and there is no lasting harm, physical or emotional, to either of them. That can’t always be achieved vaginally and drug free.

The second idea is pretty much a meme amoungst advocates of midwife led natural birth, here’s just one example: 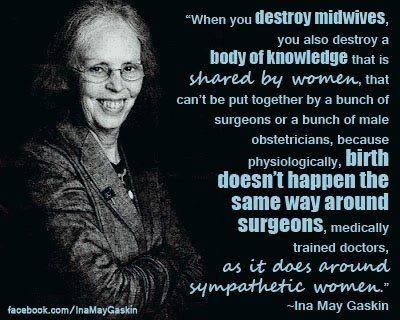 Essentially, midwives are wonderful, nurturing women. Doctors are cold and uncaring men, devoid of human sympathy. They have no interest in mothers or their babies, and just want to get those births over and done with as quickly and clinically as possible (without any chance of getting sued). According to this belief, midwives and doctors aren’t two medical professions working together , they are two utterly opposed ideologies.
True, there are plenty of great midwives and a lot of rather aloof and callous doctors, but no profession is made up entirely of angels or demons. There are some pretty damned unsympathetic midwives out there. I’ve been on the receiving end of some of their “care”. I’ve also met some lovely doctors, including two male obstetricians who showed enormous sensitivity when I burst into tears during their busy clinic and took great care to reassure me and give me options about my care. Not only is this “Midwife good doctor bad” meme inaccurate it’s also does a huge disservice to the great many women who turn out to need care from a doctor. In the UK, a woman with a low risk pregnancy will normally only be cared for by midwives, both before and during the birth. But what if she turns out not to be low risk?  She will most likely already be worried about whatever that risk is. If she’s also been taught to believe that the doctors she will have to deal with will be uncaring and even dangerous, how much more fear will that place on her? How much harder will it be for that woman to work with her doctor, and make informed decisions about her care, if she is expecting a fight before they even meet?
Sadly, at Morcambe bay these two ideas seem to have run to their extremes. Instead of working with doctors the midwives set themselves apart. They held the ideal of normal birth so high that lives were sacrificed to it. The individual midwives were not the only ones at fault of course. The doctors should have spoken out but they didn’t and at many levels problems were ignored and hushed up for years. Mistakes happen, but these mistakes were systematically hidden away and so they continued to happen and more and more families faced going home with empty arms.  We only have the Kirkup inquiry because of the astonishing bravery and determination of some of those families, such as James Titcombe, who’s baby son Joshua died of sepsis after a shocking lack of care which was then covered up.
I absolutely stand with those who want to improve women’s experience of childbirth. I owe a huge debt of gratitude to everyone who fought to move us away from the “do as you’re told, doctor knows best” attitude of the past. I know that there are many wonderful midwives and that “normal” birth is the best possible birth for many women. But perhaps it’s time for a little reality check. Midwives aren’t all heroes, they are human beings after all. Exalting them as something apart from everyone else and from other medical professions might feel nice, “empowering” even, but it helps no one. Not the midwives who want to be great and what they do and who need to be able to learn from mistakes. Not the doctors, who have to deal with women who walk in their door already scared or angry with them. And certainly not the families, who need a kind and knowledgeable team to guide them through they most physically and emotionally demanding events of their life.
SBx