This post is for the Save the Children First Day campaign, I wouldn’t normally put up quite so many serious posts on my blog in one week, but this is a very important cause.

This is my eldest daughter, E on her first day at school last September:

Here she is on her first day as a big sister: 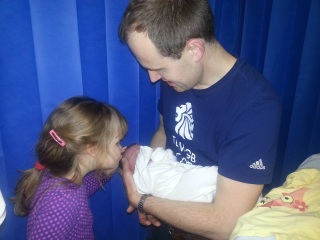 E’s birth was long and complicated, In the end, an instrumental delivery failed when her head became stuck in my pelvis and she was delivered by emergency caesarean. It was terrifying for me, but for the team of surgeons, anaesthetists, nurses and midwives in the specialist obstetric operating theatre of a major London teaching hospital, it was all pretty routine.

Had I been in somewhere else in the world, it could have been very different. We would never have had all those other first days with E.

It took the full force of modern medicine to save us, but staggeringly, every year, 2.9 million babies die in their first month, and many of them could be saved if they just had access to a local midwife or some antibiotics.

Just have a think about that number for a minute. 2.9 million.

The good news is, things can and are getting better. In 1990 the total number of children dying each year was 12.6 million. Thanks to family planning, better treatments for childhood illness, and of course global vaccination programmes that number had fallen to 6.6 million by 2012. But there is a lot more that can be done, especially in those vulnerable first days.

Here’s now you can help, in just a couple of minutes, without even getting up from your seat.

First – click here to sign the Save the Children petition to ask David Cameron to use his influence over governments and wealthy business people. Ask them to work together and commit to ensuring every mother has access to a trained midwife.

Then, instead of buying that next fancy coffee, donate £3 to Save the Children. That’s enough to buy ten tubes of antiseptic cream, which could be all that’s needed to save the life of a newborn baby.

Thank you, normal ranting will continue at a later date…
SB

One thought on “First Day”