Imagine you are taking part in some sort of extreme sport endurance event, say a really long, non stop hike. You’re not at peak fitness but, at the start, it’s going ok. However, 20 or 30 hours in it’s got a lot harder, you’re climbing up ever steeper hills, tired and in a lot of pain. It’s as much a psychological battle as a physical one, you want to give up but you force yourself on, up the next hill and the next, you can’t even see the finish line yet. Then suddenly something happens. Maybe an accident or an injury. The event you expected to be tough but safe has suddenly become life threatening. There are people everywhere and you’re rushed to an operating theater for major surgery. You are exhausted and terrified but thankfully you pull through.

Now what you might think you’d need after all that is rest and sleep so you can start to recover. But weirdly you find yourself in some strange world where, not only is it assumed that you’ll stay awake, possibly for several more days, but you’re also expected to think it’s all been the most wonderful experience of your life. Oh yeah and did I mention you’ll also be handed the biggest responsibility of your life at the same time too?

(Have I stretched the metaphor too far yet??)

Seems ridiculous right? Of Course people would realise you need to sleep after all that. But swap the endurance hike for a long labour and make the surgery an emergency c section and it’s a pretty ordinary experience of an NHS postnatal ward.

The absurdity of that struck me somewhere into my second sleepless night on one such ward. The doctors and midwives were telling me I needed to be in hospital to recover but all I really needed was someone to keep an eye on me, regular pain medication and some rest. I was getting none of those things on that ward (you can read more about my postnatal care here, it’s not a happy story) The complete lack of sleep was unbearable. I finally left the hospital on a Thursday afternoon, the last time I’d gone to sleep was the previous Saturday.

Of course we expect new mums to be sleep deprived, it’s kind of a grim joke and oh how everyone loves to tell you all about it when you’re pregnant. But does that mean that mums don’t really need rest to physically recover from a c section or a difficult birth or even a pretty straight forward one? Does one source of sleep deprivation mean you should just accept all others? Noise? Pain? Fear? Suck it up ladies you’re a mother now. Major physical trauma is no reason to sleep on the job!

It’s also possible that sleep has a roll in psychological recovery. Many women who have had difficult births walk away with just some bad memories or a good horror story, others suffer lasting psychological trauma. There is likely to be a large number of factors involved in determining who develops trauma symptoms but I wonder if sleep, or the lack of it may contribute. Heads up I really am speculating here which isn’t very scientific I know, but there simply isn’t much research on this at all. We do know that sleep problems are a symptom of trauma and PTSD and there is some (very limited) evidence that sleep disturbance prior to a traumatic event increases the likelihood of PTSD but I wonder what effect extreme sleep deprivation after giving birth might have?

I started thinking about this a few years ago following a conversation with a clinical psychologist. After my daughter was born I found myself telling the story of her birth over and over again in my head. I didn’t want to, but it was always there, nagging at me. The Psychologist explained that sometimes difficult memories get stuck, the brain fails to file them away as it should and they remain rumbling around where they aren’t wanted. We do know that sleep is important for consolidating learning and memory, could it be that sleep deprivation after a traumatic event interupts that filing process and increases the risk of problems later on? As I said that is pure speculation I couldn’t find any studies on it other than one in mice which actually suggested the opposite. I’d love to see more research in this area. 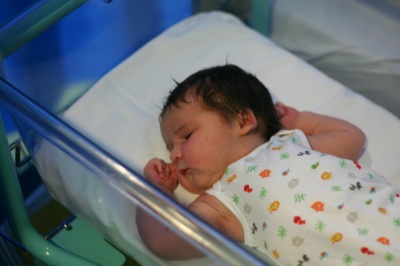 So, if we accept that new Mums need to be able to sleep, for physical healing, maybe pschological healing and just because oh god how we need sleep – what can be done to make it possible? It’s tricky, but I don’t think you should criticise something without offering alternatives so here are a few ideas:

The dream scenario: (no pun intended)

Single rooms, space for partners, noise limiting design, lots of time with kind and reassuring staff. This would all be great, but of course it costs money!

Respect – staff, mums and visitors should be encouraged to keep noise to a minimum at night. That’s surely just common courtesy but it often doesn’t happen.

Babies of course can’t be expected not to make noise and if there are four or more in a room that could be a lot of noise. So perhaps if there isn’t space for single rooms a few quiet spaces could be set up where mums could go to get away from the noise of others for a while, even if only to rest rather than actually sleep. It would be a whole lot better than the night I spent on a plastic chair in a milk pumping room! Or maybe there could be a nursery, not the strictly enforced separation of mum and baby that used to happen, but an option to have your baby cared for by someone else just for a short period of time.

Out of Hospital Care.

Maybe we should also be looking at caring for women away from hospitals all together? Like The Duchess of Cambridge, many women who have straightforward births now go home within hours, but could more complicated cases also be cared for at home? If there was better and more consistent out of hospital post natal care then many more women could probably go home sooner. Even after my emergency C section all I really needed was pain relief, occasional basic checks and some help with breast feeding. All that could have been done at home, in my own bed, with my own food and no noisy strangers. I was only minutes from the hospital if there was a problem. This level of home care is already available to a lucky few who have NHS caseload midwives. It would be great if it could be extended to everyone who wants it.

Ultimately being a new Mum is bound to be exhausting but the noisy and chaotic environment of post natal wards and the resultant lack of sleep is something many women struggle with. I’ve heard several Mums say that their experience on the ward was far worse than the birth itself. Surely it’s worth taking a few simple measures to promote rest and recovery? Is it really indulgent or ridiculous?

This post goes along with the end of the #MatExp ABC on twitter. There has been a lot of talk about creating  safe, comforting and calm environments for women to give birth in. The Maternity experience is, for most, just the start of a lifetime of joy, and hard, hard work, I think we should extend that nurturing and care for just a little longer, so that mothers can head out into their new life ready for all the trials, and all the wonder, to come.